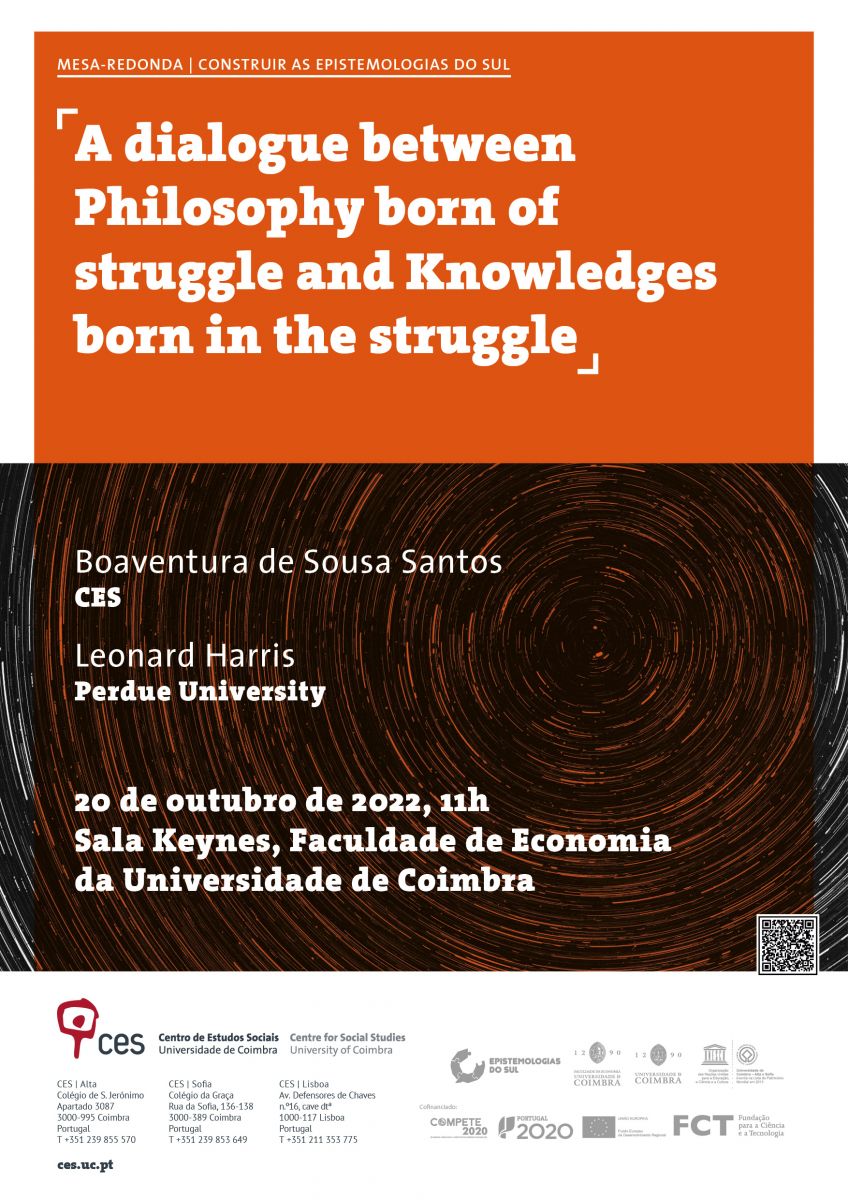 Keynes Room, Faculty of Economics of the University of Coimbra


Philosophy born of struggle and Knowledges born out of struggle associated respectively with the work of Leonard Harris and of Boaventura de Sousa Santos, stand for two paths of engagement with the diversity of struggles against domination, oppression and exclusion that generate unjust and unnecessary forms of suffering, predation and destruction.

Harris builds on a tradition of black resistance and insurgence across a range of settings and historical experiences. Two key elements of Leonard Harris’s work are the concept of necrobeing and the approach he describes as actuarial. Knowledges born out of struggle are at the core of epistemologies of the South, building on Boaventura de Sousa Santos’s work, based on the recognition of, and engagement with, the diversity of experiences of resistance and struggle across the world and of the knowledges emerging from them. Key elements of epistemologies of the South are the concepts of abyssal exclusion and ecology of knowledge and the approaches of sociology of absences and sociology of emergences.

In this roundtable moderated by João Arriscado Nunes, a conversation between these two approaches is proposed, in order to explore convergences and differences and the paths to mutual understanding and collaboration between them.

Leonard Harris, Department of Philosophy, Purdue University. Professor, Department of Philosophy. Editor of Philosophy Born of Struggle (1983) and three books on the philosopher Alain Locke. Harris is the author of “struggle philosophy,” an approach to philosophy that is different from the Socratic dialogue method, the ethics of insurrection, critical pragmatism, advocacy aesthetics and the concept of racism as “necro-being.” A graduate of Central State University, Ohio, and Cornel University, Harris is Board member of the Philosophy Born of Struggle Association and the Alain L. Locke Society.

Boaventura de Sousa Santos is Director Emeritus of the Center for Social Studies at the University of Coimbra and has written and published widely on the issues of globalization, sociology of law and the state, epistemology, social movements and the World Social Forum. He earned an LL.M and J.S.D. from Yale University and holds the Degree of Doctor of Laws, Honoris Causa, by McGill University. He has coordinated the project ALICE: Leading Europe to a New Way of Sharing the World Experiences was funded by an Advanced Grant of the European Research Council. He has been awarded several prizes, most recently Frantz Fanon Lifetime Achievement 2022, by the Caribbean Philosophical Association; Science and Technology Prize of Mexico, 2010; the Kalven Jr. Prize of the Law and Society Association, 2011.

João Arriscado Nunes is a Senior Researcher at the Center for Social Studies, University of Coimbra, Portugal, of which he was Executive Director (1998-2000) and a member of the Coordination of the Epistemologies of the South Full (alice-ES) Research Program. Full Professor of Sociology (Retired) at the School of Economics , University of Coimbra. He was co-coordinator of the Doctoral Program "Governance, Knowledge and Innovation), a member of the Advisory Council of the Portuguese Sociological Association and of the coordinating team of a number of international research projects.