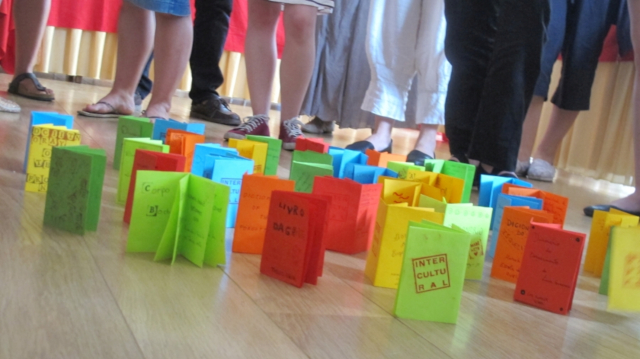 The Epistemologies of the South Summer School will focus on the role the Arts play in broadening the North-South/South-South dialogues, and thus in the expansion of political and epistemological imagination, which does not exhaust itself in the denouncement of hegemonic capitalist, colonialist, and hetero-patriarchal thinking. The Covid-19 pandemic brought to light the deepest existing inequalities in the world, which were often ignored or neglected, producing forgetfulness and absences. After almost two years since the appearance of Covid-19, in these difficult and unfortunate times, something has become clear: the Arts have been presented to express our feelings, allowing us today more than ever to speak through them, in a multitude of artistic forms and languages, such as graffiti, photography, cinema, music, the arts, literature or knitting.

As Boaventura de Sousa Santos says, we live in a period in which the most disgusting forms of social inequality and discrimination become politically acceptable. Modern contestation ideologies have been largely captured by neoliberalism. There is resistance, but it is becoming less credible as a realistic alternative. This resistance exists now more than ever outside the institutions and not through the modes of political mobilization prevailing in the previous historical period (political parties and social movements).

We believe that the arts, seen as an emancipatory alternative or simply as a way of contesting power and expressing our disagreement, can perfectly dialogue with science and academic knowledge. Hence, the Epistemologies of the South demand a new aesthetic, a plurality of post-abyssal creative artistic practices that emerged from the struggles against capitalism, colonialism, and heteropatriarchy. This being a call to transgress the boundaries between academic knowledge and knowledge born in social struggles, recognizing the role of emotions in the creation of transformative knowledge.

As in the previous editions, a heterogeneous group is expected in terms of origin, knowledge, age and experience of work and struggle. This summer school will be a space of mutual exchange and co-learnings that will provide the means to imagine and draw real utopias from concrete experiences and knowledges. As the school seeks to explore, Southern aesthetics, in its pluriversity, integrate artistic expressions from numerous cultures and aesthetic theories developed outside the paradigm of Northern epistemologies, offering keys to thinking about and understanding other pasts and new futures.

Epistemologies of the South seek to broaden the possibilities of rethinking the world from the knowledges and practices of the Global South. As an epistemological and political proposal, they challenge attempts at epistemic silencing, epistemicide or epistemic subalternisation. The South, in this context, is heterogeneous and includes diverse spaces, varied experiences and an infinity of knowledges.
With this new edition of the School we seek, through the arts, to develop theoretical and methodological approaches that enable critical diagnoses of the present from an ecology of knowledges, having as a constitutive element the possibility of reconstructing, formulating and legitimating alternatives for fairer and freer societies.
Articulating art, science and the knowledges of resistance and struggles, the work will be collective and will bring together researchers from the Epistemologies of the South group, artists and intellectuals committed to Epistemologies of the South, as well as forty participants from various parts of the world and bearers of different knowledges.

As in previous editions, we expect a heterogeneous group in terms of origin, age, work experience and struggle. This summer school will be a space for exchange and co-learning to imagine drawing utopias from concrete experiences and knowledges.

An interdisciplinary programme
Relying on the strong international dimension of the Epistemologies of the South, this Summer School will be still organized on-line, due to COVID-19 restrictions. It will focus on "Existing, Resisting and Struggling through the Arts" and will run from June 27, 28, 29 and 30 through 04, 05, 06 and 07 of July 2022.The major themes, such as ecology of knowledges, colonialism, decolonization, the arts, mediations and supports (institutions, actors, material supports) or translation (transmission, adaptation, appropriation) will be addressed through the presentation of concrete examples.

Who is the course aimed at?
Students, teachers, social movement activists, and general public.

Course objectives
The course is designed as an environment for the work and co-participatory construction of knowledges born from experiences, based on a pro-active and innovative pedagogical methodology. The course will function based on dynamic co-work in reflexive teams during the workshops, where students and lecturers share knowledge and dilemmas about the problems that mark the contemporary world. The horizon of decolonisation of knowledge is a central objective. In this sense, main objective of this advanced training course is to promote South-South interdisciplinary dialogues to broaden reflection, show and make visible, record, interpret and extend the knowledge that sustains social struggles in our times.
The course is based on four fundamental axes based on the epistemologies of the South:

Applications are open to all those available to participate in a challenging space of mutual learnings towards the decolonisation of thought and struggle against capitalism, colonialism and patriarchy. A heterogeneous group is expected in terms of origin, knowledge, age and experience of work and struggles, composed of academics of different areas, artists and other professionals, students and activists.  Involvement in social movements or other forms of activism or social struggle is highly valued.

We understand the course as a space for conviviality, well-being, the sharing of heterogeneous knowledges and mutual learnings among everyone. We recognise the centrality of the production of knowledge beyond the walls of the academy and seek for artistic production to challenge the political imagination.
We acknowledge the extraordinary differences that make up the world and are convinced that shared experiences of struggle allow the constitution of a diverse but united South with potential for resistance against colonialism, capitalism and patriarchy.

All those interested in participating in the Summer School must fill in the APPLICATION TO SUMMER SCHOOL FORM.

The Summer School is self-funded and does not generate profit. Registration fees grant funding for scholarships for participants.

Notification of acceptance will be accompanied by guidelines for the participant regarding how to proceed with the registration and payment.

For any queries relating to these matters, please contact the organising committee at alicesummerschool@ces.uc.pt.